Wade Doiron would be the first to tell you, there are no shortcuts in life. To truly succeed, you must work hard at what you love to do, and, if you’re lucky, you will also work in the place you love. These values filter through every aspect of Doiron’s Landscaping & Garden Centre of Charlottetown, P.E.I. 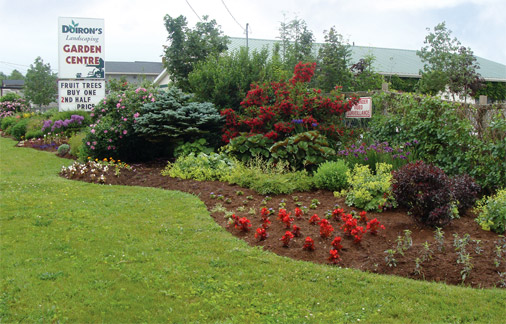 It is a home-grown business. In the fall of 1983, Wade and his wife Janet started the business out of their home, using a ’69 Chevrolet pickup truck to make deliveries. They lived in North Rustico, P.E.I., on the northern coast of Prince Edward Island near Cavendish – Anne of Green Gables country. Wade, who as a boy in the 1960s grew his love of gardening while transplanting trees from the wild after Sunday walks with his father, had been working in the trade for about eight years when he and Janet decided to strike out on their own. A couple of years later, they bought property next door and ran the business from there. In 1992 they moved to their current Charlottetown spot, and in 2000 followed by buying a home there.

The new location, a corner lot on a busy street near the airport and several businesses, was good for Doiron’s for several reasons. It accommodated the centre’s growth, cut down on the transportation time and costs to Charlottetown, which was becoming home to more and more of the centre’s clients.

It also was the birthplace of Doiron’s Christmas store. During the spring and summer a section of the garden centre is allotted the Christmas store, but in the fall the entire centre is transformed into a Christmas showcase until Dec. 31. The idea for the store grew naturally out of something the staff already loved to do – deck the halls!

The heavy advertising Doiron’s undertook – print, radio and television along with a well-attended open house – has paid off, with customers to this day coming from all parts of Prince Edward Island to see themed trees – a breast cancer awareness tree is in the works for next season – and choose from several Christmas gift collections. Favourites include the Dickens Village, the North Pole series, Byer’s Choice carolers and several versions of the “Christmas pickle” of legend (which brings good fortune to the child who finds it). The store also carries ornaments with an Island theme, candles, and artificial trees. Wade says he frequents gift shows such as the CGTA in Toronto to keep on top of trends and choose items for the store. 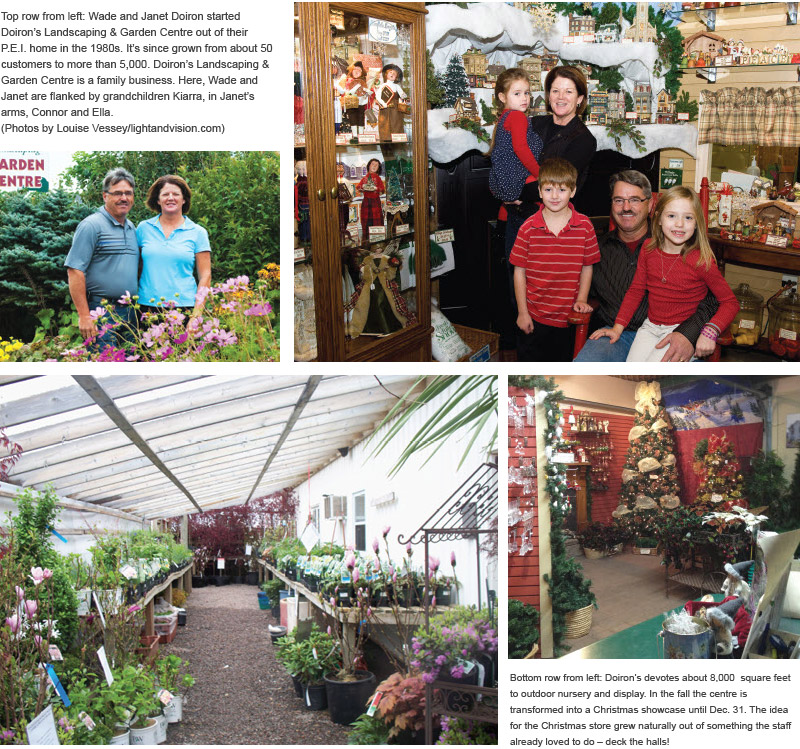 The staff expend a lot of energy to create this infectious Christmas atmosphere. Wade and Janet work full time and employ 16 part-time employees during the busiest part of the season in the spring. Although Doiron’s boasts several longtime employees – about 80 per cent of his people have worked in the business for between eight and 25 years – he says that in hiring he tries to get a feel for a candidate: if the person seems energetic and has a pleasant personality, he says, usually the ability to assist the customer and make the sale come naturally. He then makes sure the new hire understands the hard work they are in for, and what’s expected of them. The employees do most of the training, through a process of job shadowing.

Some of those trusted employees become like family; others are family. Wade’s brother Glen came on board early on in 1984 as a landscaping specialist, and another brother, Sandy, has worked in the retail area of the business since 1988. Both are experts in their respective fields and, he notes, are often asked for by name. His son Jeremy works in the landscape side and daughter-in-law Nikki provides all-important personalized customer service.

“The staff are very personal with our retail clients and seem to have a way of offering advice, good products and also an appreciation of each purchase,” Wade says with pride. 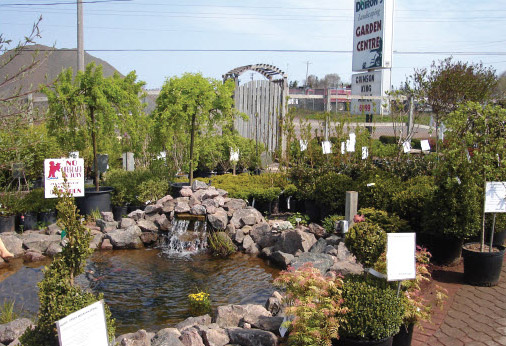 The entrepreneur feels especially lucky to work in a place he loves and has always called home. When recommending plants and shrubs to customers, however, the Island’s climate – particularly its seaside challenges – sometimes figures into the discussion. Although the inland climate is moderate, like that of other places such as southwestern Ontario, when choosing plants for those who live on the coast, Wayne says it is important to consider which will withstand the salt spray and seaside winds, and thrive in acidic soil. Boxwood has proven a solid choice.

“I have always been willing to try new plants,” he says, and found that boxwood, which he has brought in from Ontario since the 1980s, seems to like the Island’s soil. Doiron’s gets a number of items from southwestern Ontario, particularly Rockwood and the Niagara region.

Doiron’s works with wholesalers to keep prices down by buying popular items, such as blue hydrangeas, in bulk. He can advertise specials, passing savings on to the customer when they get a good deal from wholesalers.

TREND AWAY FROM DIY 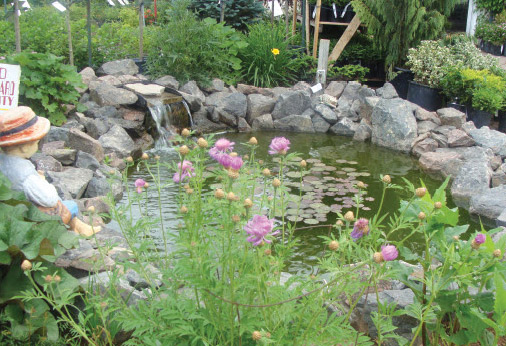 Although he doesn’t target any specific customer demographic, Wade has noticed that many of his customers are over 35. He has also seen a rise in customers looking to spend less time working in their gardens and more time enjoying them. “In the 1980s and early 1990s, we sold more plants to each customer and they thought nothing of spending hours working in the garden,” he says. “Now we sell fewer plants per customer but we have more customers. And those customers are looking for well-made, low-maintenance items. I think that’s true of any garden centre anywhere these days.”

Though the work is hard, Wade Doiron clearly enjoys what he does and appreciates those he works with. “I am so lucky not only to make a living at what I love to do, but also to have a staff to show the same love of the job,” he notes with pride. “I cannot tell you how many times I have had clients call just to thank me on a job well done by my staff.”

With a business that grew from about 50 customers, to more than 5,000, he is unmistakably positive about future prospects in his industry. “You better your business as you go,” he says, “but eventually you have to step back from it. My personal hope is that Doiron’s lasts well beyond my lifetime.”

However, Wade is nowhere near retiring. He says, “I do not think I have reached my goals in life. I have noticed each morning I wake up with plans for that day – and I’d hate to see the day I didn’t.”